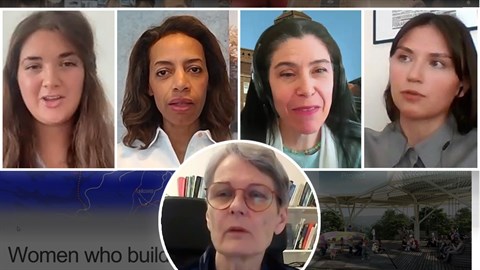 Thank you for taking part in the webinar Women Who Build Cities!

Here are the related notes and links that were discussed and presented during the webinar, as well as links to relevant research and academic and popular literature on the subject.

'With women occupying just 10 percent of the highest-ranking jobs at the world’s leading architecture firms, cities have historically been planned and designed to reflect traditional gender roles and gendered division of labor. As a result, cities work better for men than they do for women".

Evaluation of Civil Engineering Programs at Swedish Universi­­ties and Institutions of Higher Education
"The percentage of women of students who begin a civil engineering program has decreased. This is not only a matter of recruitment, but also of teaching methods and educational culture"

Transport is Not Gender-Neutral
"Female participation in the transport sector—as operators, drivers, engineers, and leaders—remains low. According to Harvard Business Review, “women make up 20% of engineering graduates, but nearly 40% of them either quit or never enter the profession.” As a result, the transport industry remains heavily male-dominated, which only makes it harder for women service users to make themselves heard, and limits incentives for the sector to become more inclusive."

Urban Planning Has a Sexism Problem
An article touching the topic from the angle of lack of female representation as authors of official city development documents, bestseller books on urban planning, amount of female panelists and keynotes at planning conferences –

City with a female face: how modern Vienna was shaped by women

Vienna has been pioneering ‘gender mainstreaming’ for nearly 30 years. How did the city come to be so far ahead – and could its gains be lost?

Feminist City by Leslie Kern examines how urban design has turned more than half the population into second-class citizens.